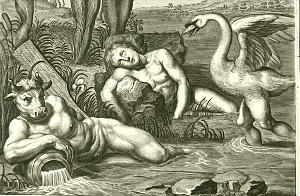 The Greek mythology Minotaur has held the interests of many individuals throughout history. This mythical creature possessed the same body as a person. However, his head looked like that of a bull. There was a special place that looked like that of a maze called "Cretan Labyrinth". This was originally built for the Crete King named Minos. An architect by the name of Daedalus was said to have created the structure along with his son Lcarus. It has been stated that it was specially designed to hold the Minotaur. When evaluating the Greek mythology Minotaur, you will discover that the brave son of Aegeas named Theseus eventually killed it.

If you were to translate the name "Minotaur" in Greek, you would find that it translated to "Bull of Minos". However, in the time that the mythical creature existed, it was often referred to as "Asterion". Ironically, this is the same name of the King Minos foster father. How did the mythical creature come to exist, though? Well, Minos was competing with his brothers in order to rule the region. It is said that sent a prayer to the god identified as Poseidon to provide him with a bull that was snow white in color so that his brothers would know it was meant for him to have rule over the region, and not them. This was the start of events that would lead to the birth of the Greek mythology Minotaur.

Poseidon approved the request and made an arrangement with Minos. It was that once he received the bull, he was to sacrifice it so that he could show his respect to Poseidon. Unfortunately, Minos was so obsessed with the beauty of the creature that he failed to uphold his side of the deal. Naturally, this angered the god. As a form of punishment, he motivated the wife of Minos to fall in love with what is called the "Cretan Bull", which is the bull that was from the sea. It is said that she ordered Daedalus to create a wood bull. She used this to climb on so that she could copulate with the Cretan Bull. As a result she gave birth to the Minotaur. Despite the fact that she did care for the creature upon birth, he eventually became too much to handled. This is when the creature was placed in confinement.

While there are very few reports of sightings associated with minotaurs in general, many individuals still feel as if a form of this creature may be wandering the earth. There are others that claim that the spirit of the original Minotaur still lives on. Many even claim that this creature never existed. The Greek mythology Minotaur is one of the most popular stories of mythology. Was it real? Do other minotaurs wander the earth? This is definitely one of the world’s greatest mysteries.